Japanese green tea is synonymous with a fulfilling and authentic Japanese experience. The population of Japan consumes an abundance of green tea daily because it is simply part of their lifestyle. It is also globally revered for its health benefits, calming sensation, and its delicious earthy taste.

In Japan, you will see green tea served everywhere, in all different forms. People don’t just drink it hot over there, they also consume it cold, in ice cream form, as a food seasoning, and it’s even a popular flavor amongst many desserts.

To the untrained eye and taste buds, Japanese green tea may be confused with Chinese green tea, however, they are two vastly different types of teas. From their production methods to the terrain in which they farm the tea leaves, the many contrasts lead to dissimilar tasting teas. 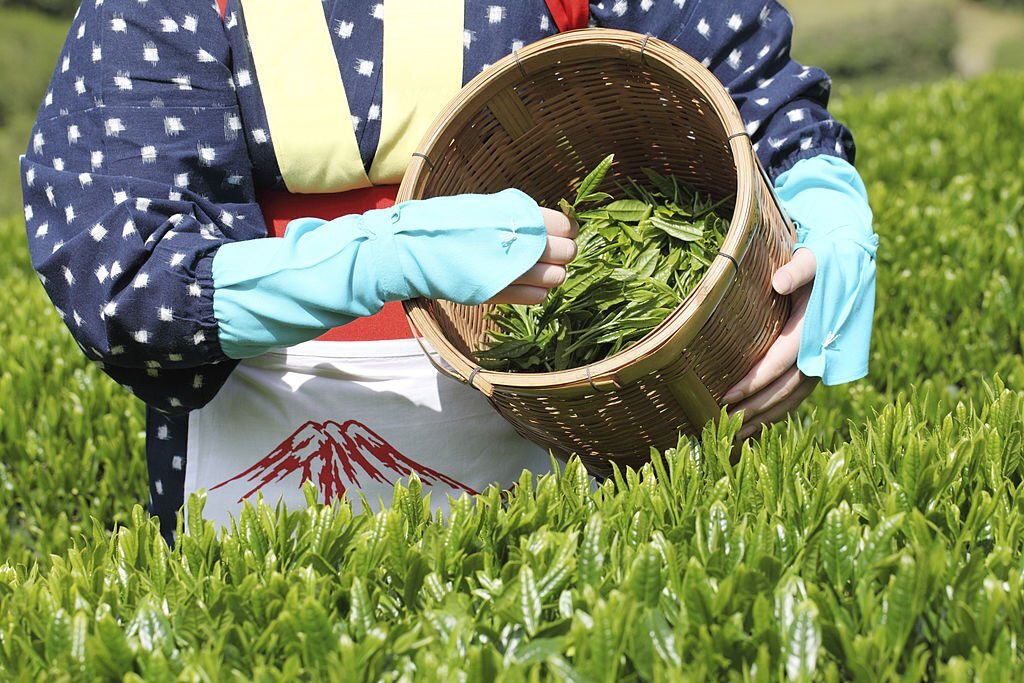 Japanese green teas are noted for their sweeter flavor profiles with a deeper color and lingering savory and roasted notes. There are up to 20 different types of Japanese green teas that differ in terms of their age and leaf treatments before and after harvesting.

Let’s go through the 10 best types of Japanese green tea, but first, let’s learn a bit about its history. We guarantee this will deepen your drinking experience. Japanese green tea is steeped in Japan’s history and culture, having been introduced by traveling Buddhist monks more than 1000 years ago.

Green tea was traditionally only consumed by royalty and elite social groups. During the 12th century, a priest shared information on the preparation and consumption process of green tea to the public, and a new era of Japanese green tea was born.

The 12th century is when green tea cemented itself as a staple in the Japanese lifestyle. It is also the period when chanoyu (Japanese green tea ceremonies) began, eventually becoming an important aspect of Japanese culture and a tradition to achieve Zen and balance. Today, Japanese people consume copious amounts of green tea daily. It is ingrained in their society. People offer it to guests who visit their homes, restaurant patrons, and even high levels of government officials are greeted with green tea. As previously mentioned, many people drink green tea not only for its delicious taste but also for its myriad of health benefits.

Japanese green tea is loaded with nutrients and antioxidants that assist with such things as fat loss, brain function, and even bad breath!

We can go on forever about just how good Japanese green tea is for the body, but instead, we’ll detail the top five benefits green tea has to offer.

Green tea contains a high number of naturally-occurring stimulants including caffeine. Whilst it doesn’t ‘wake’ the body as strong as coffee, it still helps with alertness and concentration.

At the same time, it is a source of L-theanine which increases mood-enhancing brain chemicals such as dopamine and serotonin, relaxing the body.

If you’ve ever gone on a diet or read about fat-loss diets, chances are, green tea is listed as one of the drinks you should consume.

Studies have shown that green tea often boosts metabolic rates and thus increases fat burning in an individual. It is believed to be a result of caffeine separating fatty acids from fat tissues to be used as energy, as well as plant compounds such as catechins being evident in green tea.

4. May reduce the risk of heart disease

Many studies have shown that green tea can help with reducing the risk of cardiovascular disease. It is believed to help improve the management of cholesterol levels and increase antioxidant levels in the blood.

The catechins evident in Japanese green tea are also believed to suppress bacteria growth in the mouth. As a result, there is lowered risk of bad breath and infections. Let’s now dive into the list of the 10 most popular types of Japanese green tea that we recommend you to try! Matcha is a tea powder that is made from the grounded leaves of shade-grown sencha green tea leaves. It is one of the most well-known types of green teas from Japan. In its purest form, it is a bright green powder.

It is considered one of the healthiest forms of Japanese green tea, simply because you are consuming the entire leaves grounded, rather than steeping the tea and removing the leaves. It contains the highest concentration of antioxidants and primes your body to absorb more vitamin E and dietary fiber.

The most traditional way to enjoy matcha is as part of a Japanese tea ceremony. It would be mixed in a bowl with a bamboo whisk.

If you want to drink Matcha at home the traditional way, feel free to order one of our Matcha Tea sets. They include a bowl, a bamboo whisk, a whisk holder and a bamboo spoon. These days, matcha is a flavor that is available in all forms, including Kit Kat, ice cream, potato chips, and even food seasoning! Sencha is arguably Japan’s most popular green tea as well as its biggest tea export. Sencha is popular because it is produced using the youngest leaves of the tea tree, thus containing the most nutrients.

It is a fresh and earthy smelly tea, and when steeped, its leaves unfurl to resemble long dry grass. It is a smooth and refreshing tea with a subtly sweet aftertaste. Genmaicha can be a little confronting if you’ve never tasted it before. This Japanese green tea mixes green tea leaves (usually sencha) with roasted brown rice or popped brown rice kernels for a comforting balance of fresh and full-bodied flavor.

Originally created to make green tea more affordable to the masses, it is now considered a treat for its unique flavor and aroma. Gyokuro green tea is considered one of the premium blends of Japanese green tea. The highest grade of gyokuro has a creamy taste with a sweet finish.

The tea plant is shade-grown for the last two to three weeks before harvest. This results in the tea leaves turning into a deep green when dried and steeped.

Being shade-grown, they also develop higher levels of chlorophyll and L-theanine and thus contain greater levels of caffeine than most green teas. Hojicha tea is best known for its comforting, nutty-flavored taste and aroma.

It doesn’t look like your typical Japanese green tea because it becomes a mild brown color when it’s brewed. During production, the tea leaves are roasted instead of steamed. You will smell the undertones of the roasted leaves before brewing the tea, however, once brewed, it will emit a slight caramel smell.

Hojicha is one of the Japanese green teas with minimal caffeine levels, making it a popular choice amongst the elderly and young people. Uji green tea is a region-specific tea, made from tea leaves cultivated in Uji, Kyoto.

Uji is an area in Japan that’s famous for its green tea! It’s steeped (pun intended) in Japanese history, producing tea that was presented to high-ranking military officials as a sign of respect and dedication.

This tea is revered not so much for its unique taste, but its cultural significance. Drinking green tea in Uji is an experience by itself. Tencha is the purest form of Japanese green tea you can consume. It is made exclusively of the tea leaves and discards all stems, veins, and stalks in the production process.

Tencha tea leaves are shade-grown, and you’ll know this by admiring just how bright green the tea leaves are as they unfurl. It is one of the sweetest Japanese green teas with only a slight subtle smell.

Because of its purity, it does come at a higher price point than most green teas. Bancha is made from tea leaves during the ‘second flush’. This refers to tea leaves that are grown from a plant where the first round of leaves (first flush) have already been plucked. These tea leaves are larger, longer, and rather pointed.

Bancha green tea does not contain the same amount of nutrients as first flush teas, and it’s noted to be more astringent and less aromatic than other green teas. However, it still offers a rich and full-bodied taste. Konacha green tea, also known as agari, is grounded green tea powder than is made from the rejected buds and particles left over after the processing of sencha and gyukuro.

It is traditionally known as “the tea of sushi restaurants” because it is the typical tea that is served there. It has strong color, flavor, and aroma. The Japanese don’t like wastage, as evident in the discarded buds used to produce the aforementioned konacha.

Similarly, kukicha green tea is made from stems, twigs, and stalks that have been discarded during the production process of green teas such as sencha, gyokuro, and matcha,

In particular, kukicha that is produced from the stalks of gyokuro or sencha is highly sought after and is known as “karigane”. Karigane is sought for its slightly nutty yet refreshing flavor and light and creamy texture.

How To Choose Your Japanese Green Tea? This is a guide and it is completely up to you what you decide to try.

How Do You Drink Your Japanese Green tea? Japanese green tea should be brewed using water that’s between 65 and 82 degrees celsius. This temperature range covers most temperatures that will produce the optimum green tea taste and smell.

With most Japanese green teas, you let the tea leaves steep between 30 seconds and 3-minutes, and then remove them and enjoy your tea.

You never use boiling water to make Japanese green tea (or any green tea for the matter) because this almost always produces a bitter, burnt flavor.

Japanese people tend to enjoy their green tea in the morning, during an afternoon break, and as a drink to serve guests who visit their homes.

I hope you enjoyed this blog post about the 10 most popular types of Japanese green tea!

When it comes to green tea, the Japanese people know what they’re doing. Whether you’re trying Japanese green tea in its purest form or as a grounded powder, there is enough variety for you to eventually find one you’ll love.

Tea has always played an important role in Japanese history and continues to do so in modern Japanese society. Immerse yourself in the culture and enjoy the beautiful flavors of Japanese green tea.

Do you have a favorite? We’d love to hear about it in the comments section below!